“It’s not a terrible thing if you’re either loved or hated,” says Kristen Stewart, seated in a cozy little bistro on the outskirts of the Los Angeles neighborhood of Los Feliz, far removed from even the most penetrating telephoto lenses. “But honestly,” she continues, “I don’t care ’cause it doesn’t keep me from doing my shit. And I apologize to everyone for making them so angry. It was not my intention.”

So says the most vilified—and highest-paid—actress in all the land. Her role  earlier this year as a sword-wielding fire­­­­­brand in Snow White and the Huntsman, a sinister reimagining of the Brothers Grimm fairy tale, was quite apropos, given that the 22-year-old starlet is, in many ways, the tabloid media’s Joan of Arc. Her refusal to kowtow to the celebrity-industrial complex, whether through her steely-eyed gaze on the red carpet or nervous fidgeting during televised interviews, is seen by many as an entitled A-lister putting on airs.

But in person, Stewart comes off like most 20-somethings might—a compelling mélange of pensiveness interrupted by sudden pangs of excitement. Clad in jeans, sneakers, and a loose-fitting sky-blue shirt, she fiddles with her greasy reddish-brown hair—the color’s a byproduct, she says, of not filming a movie for a year. 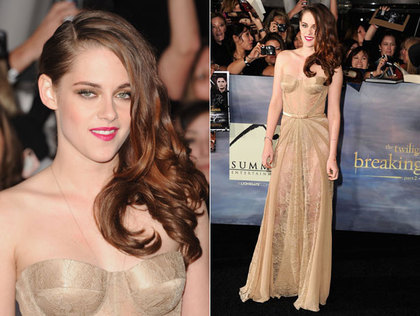 Attention Twihards! Bid now to own the dress Kristen Stewart wore to the LA premier of The Twilight Saga: Breaking Dawn - Part 2, autographed by Kristen herself. Kristen made this generous donation in support of Robin Hood as she was one of the celebrity presenters during the 12-12-12 concert.

Terms: Cannot be delivered prior to Christmas. In condition as donated. Additional shipping charges may apply based upon the location of the winner. Cannot be returned or exchanged.

Shipping and Handling: The minimum shipping, handling and applicable insurance for this item is $29.95. Additional shipping charges may apply based upon the location of the winner. Hard copies of tickets, travel certificates and merchandise are shipped via FedEx or professional shipping service. Detailed redemption information for non-tangible items will be emailed to the winning bidder.

Check out the source to bid!